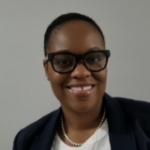 Shari E. A. James, a member of The Fink Law Firm, P.C.,  was born and raised on the island of Jamaica. She graduated from Howard University with a Bachelor of Arts in Communication and Pre-Law. After graduating from Howard, Shari began her legal career as a paralegal concentrating on medical malpractice for two prominent personal injury firms in New York City. Motivated by her passion for the law and desire to make more of an impact as an advocate for medical malpractice and personal injury victims, she continued to work full time as a paralegal while attending law school at night. Shari earned her Juris Doctor from New York Law in 2015 and is admitted to practice law in New York and the District of Columbia. Shari focuses her practice on civil litigation and, more specifically, cases involving medical malpractice, wrongful death, and lead poisoning.