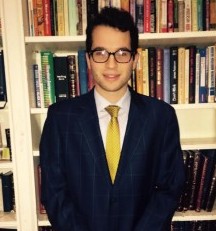 Raised on the South Shore of Long Island, Jason Fruchter is a paralegal at The Fink Law Firm, P.C.. Jason is a smart and determined worker who is dedicated to assisting our lawyers and serving our clients. At The Fink Law Firm, Jason conducts case research and drafts discovery exchanges and pleadings. Additionally, Jason is responsible for communicating with clients, insurance providers, hospitals, doctors, and opposing counsel to ensure that the firm obtains all the necessary information for each case.

He plans on attending law school in the Fall of 2016. Prior to joining the Fink Law Firm, Jason attended New York University where he graduated in three years with a bachelor’s degree in Media, Culture, and Communication and a minor in Political Science. At New York University, Jason received numerous awards for outstanding academic achievement, including making the Deans List multiple semesters and graduating Summa Cum Laude, the highest of Latin Honors. During his tenure at NYU, Jason was active in advocacy-oriented clubs and worked as a research assistant on a federally funded project studying domestic terrorism. He was also active in Save a Childs Heart—an organization that provides life saving pediatric heart surgery to children in developing countries. Jason, the fourth of nine children, is a competitive tennis player who was ranked as high as Number 2 in Long Island in the United States Tennis Association Junior’s Standing List.